“I have always been a champion for Filipinos to return to the Philippines, for short assignments or moving their careers, so that the Philippines can benefit from what they have learned overseas.” 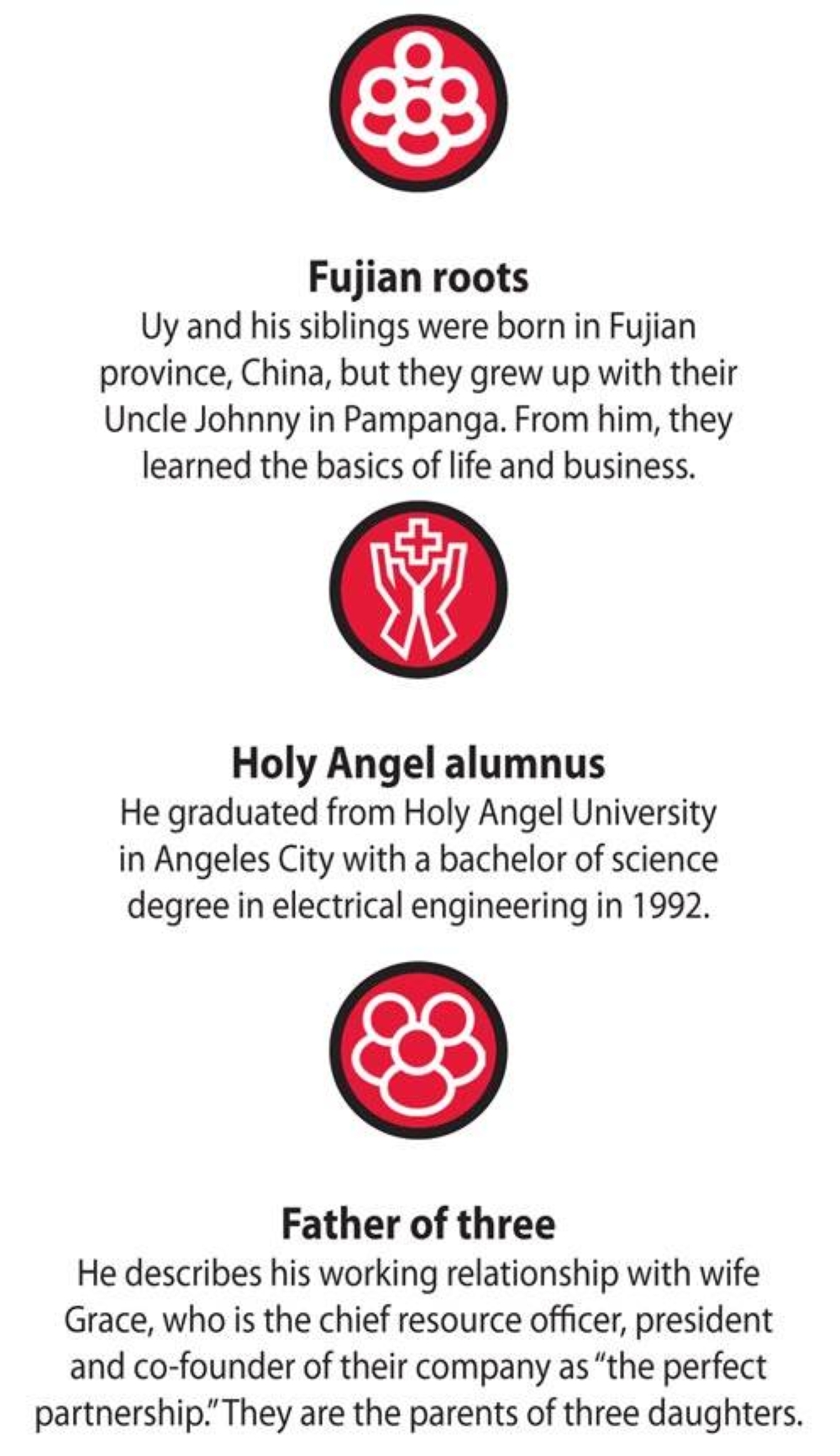 We have often heard that in Chinese, the calligraphy for “crisis” is the same as opportunity. This seems to the theme behind the success of Dennis Anthony Uy, founder and chief executive officer (CEO) of Converge ICT, the feisty new player challenging established telcos PLDT/Smart and Globe.

The first crisis happened in 1978 when life was tough in Fujian province, China, motivating Uy’s parents, Uy Chun Ching and Huang Hsi Hsiu, to send their children to their Uncle Johnny in Pampanga province. The 11-year-old Uy recalls the impact his relative had on his career, saying: “He taught me the rudiments of life and business. I was a handy man in his store, and did all that a janitor did to earn a living while attending public school.” Uy’s interest in technology and gadgets grew over time, and he was always on the lookout for new technology trends.

Life for the young employee was full of challenges. He slept on top of chest freezers in his uncle’s supermarket. He started a business renting videos and selling computers. Uy says: “I would catch a bus after classes, go to Greenhills to get my betamax tapes, then take another bus back to Pampanga so I would be home by 11 p.m.”

The next challenge took place in 1991 when Mt. Pinatubo erupted. Businesses were closing and the Americans were leaving Clark Air Base when Uy established the Angeles City Cable Television Network (ACCTN). Uy remembers: “Everyone said I was crazy to set up a business in the midst of devastation. But I was set on staying in Angeles. I grew up here, and my roots are here. The local economy was so down, it could only go up from there and I wanted to help.”

Uy pioneered the “internet age” in Pampanga. When the Mimosa leisure estate was being built, he stepped in as the cable service provider. When development re-started in Clark, Uy was the first to lay down a fiber optic cable network there. Through all these endeavors, his wife Grace worked alongside him, for which he is eternally grateful. He declares: “I have to say that ours is a perfect partnership. We balance each other off. She had an extensive accounting and finance background when she worked at IBM Philippines (before we got married), and she brought this financial expertise when we launched Converge. She’s the chief resource officer, president and co-founder of the company. Without her, I don’t think I would have made it this far in my ambition.”

Uy joined tech conferences and shows abroad and saw how far behind the Philippines was in this particular field. This opened his eyes to the possibility of bringing the country up to par with the world. He says: “Knowing the latest technology, where it’s headed and more importantly, how it can impact people’s lives was and is still exciting to me.” One innovation was micro-trenching in installing fiber. This method of laying fiber was minimally disruptive. The turnaround time for installation is faster and didn’t cause any traffic or major obstruction. Uy says: “My thirst to deepen my knowledge, my immersion in tech forums, coupled with knowing the Philippine market and the careful preparation in attracting the right investor at the right time – all of these were ingredients that allowed Converge to pull ahead of the competition”

Then, the global pandemic happened. “We were fortunate Converge was already building up its go-public plans so disruptions were managed well,” Uy says. “Our sector was considered essential, and that enabled us to cope with the booming demand for connectivity.” Work from home was imposed on non-front liner employees right after the quarantine announcement. All management and staff quickly adapted to telecommuting. Fortunately, Uy says he anticipated how things might pan out. “I began monitoring the situation, studied the Covid-19 IATF (Inter-Agency Task Force for the Management of Emerging Infectious Diseases Resolutions) rules to understand the parameters of the lockdown.”

One of Uy’s top concerns were the people, who were unable to go to work and earn a living. So, he bought 10,000 sacks of rice and had these delivered to over 33 barangays (villages) in Angeles City. No one knew these were from Uy. He did this three times, saying: “I understood that if people were hungry, there might have been chaos. It was a matter of survival. So, we had to take care of the people first.”

Then, Converge saw the demand for connectivity surge. Converge, considered an essential business, received exemption from IATF and opened its business centers. Applications, billing and services were in full swing. Uy says: “We bought a massive fleet so we could address the surge in business. We expanded our call centers. Build-up was not easy, and Converge had to do it quickly.”

As the only pure play, end-to-end fiber broadband provider, Converge is committed to bring the best internet experience to its customers. Uy is proud that his company offers superior technology and the youngest fiber network that is 100 percent dedicated to broadband services. The company was happy to announce its first quarter results last month, achieving excellent results in its financials and on track with nationwide expansion and diversification of its international network. 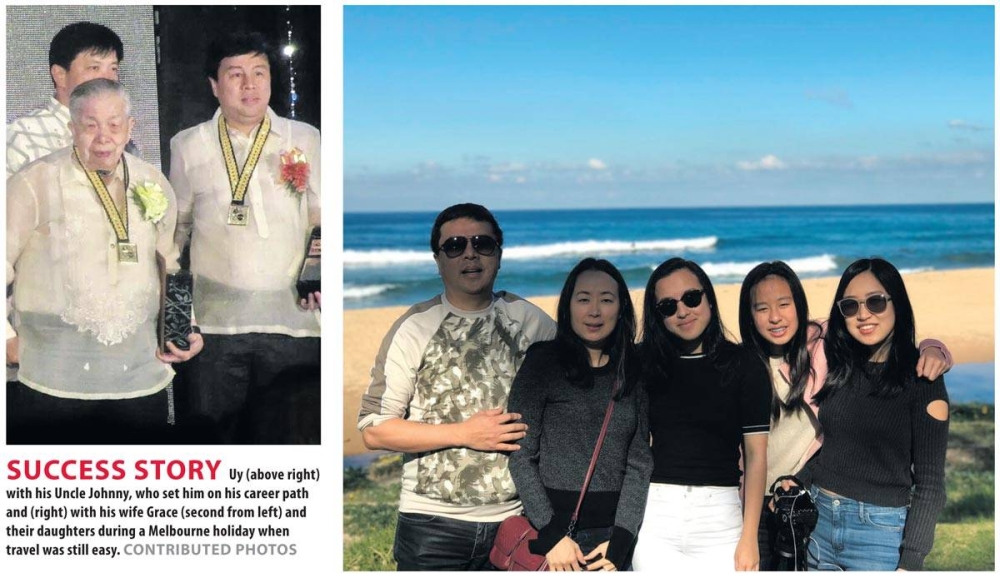 Converge financials are robust with an 84 percent revenue growth, double their EBITDA (Earnings before interest, taxes, depreciation, and amortization, used as an indicator of the overall profitability of an enterprise and almost triple their net income after tax.) They rolled-out 500,000 ports during the first quarter, with a total of four million deployed ports by March 31. With this, Converge household coverage has reached more than seven million households.

Converge is also fully on-track with their nationwide expansion. Uy adds: “Converge continues to reach unserved and underserved areas of the country. Our mission to bring world-class internet connection to majority of Filipinos reached a milestone when our fiber optic cables finally landed in Visayas and Mindanao in April.” The company is ready for commercial launch this year in select areas.

On top of the national fiber backbone, the company is also diversifying their international network. Converge took on capacity in the Trans-Pacific Bifrost Cable System, jointly built by Keppel of Singapore, Telin of Indonesia and Facebook. This 15,000-kilometer cable system is the first in the world to directly connect Singapore to the US, passing through the Philippines via Davao and Indonesia. When Bifrost goes live in 2024, it will further improve the internet experience and place Converge in a vantage position to support future demand.

To bridge the digital divide, the company signed a memorandum of agreement with the Department of Education (DepEd) to use the Converge network to enable online learning among public school students and access to DepEd’s learning platforms. In San Juan City, with the support of Mayor Francis Zamora and the LGU, 12,000 public school students and teachers are now connected to the city’s online learning portal through the fiber-fast Converge broadband.

One of Uy’s challenges is time. He says: “These days, I’m confined to my home. We used to travel as a family but during this quarantine, we stayed in Pampanga. It has always been my refuge so I took my bunso (youngest child) and wife here, and we enjoy the unhurried and tranquil pace of life.

“My weekdays are packed with meetings, but I take comfort in nature and fresh air. Hopefully after this pandemic, I can steal away (and have) time just for myself. I will go out to sea and fish.”

Converge ends 2022 at the top of Netflix’s Speed Index

Looking back at the year that changed the world, it would be an understatement to state that Covid-19 created a disruption in commerce, especially among retailers. However, this paved the way for many businesses to embrace digitalization in a new way and it became crucial for riding out the pandemic.   Check out the stories […]

The 2023 PBA Governor’s Cup has just begun, but the Converge FiberXers already has everyone at the edge of their seats with thrilling performances only indicative of their determination to take their game to a whole other level this conference. The young team is off to a rousing start with three stunning back-to-back wins, starting […]